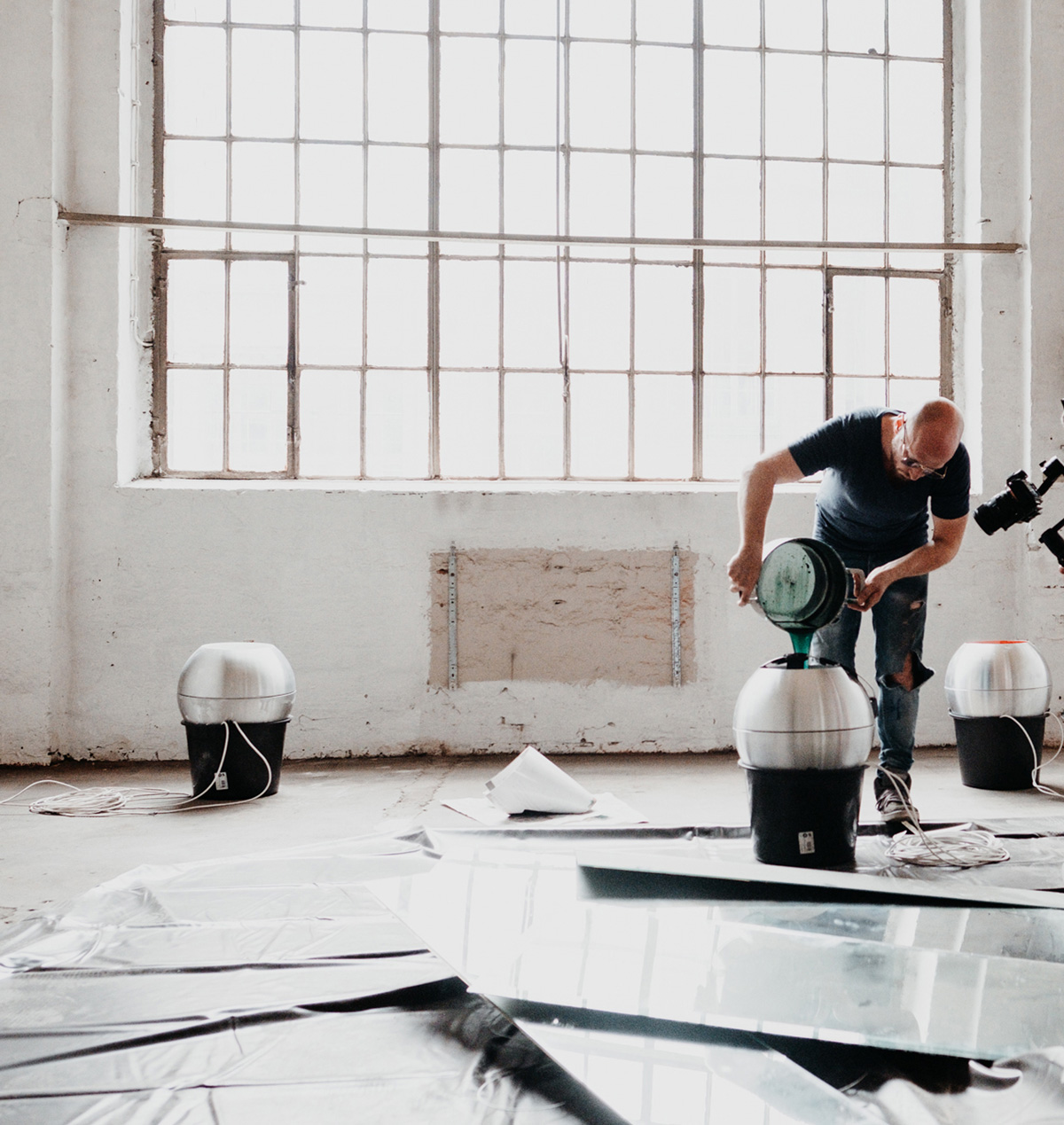 Jan Kuck, born 1978 in Hannover, lives and works in Berlin and Munich and is represented by the artist agency Bernheimer Contemporary, headquartered in Berlin.

In his conceptual art he pointedly works out both the wit and the tragedy of our society. An important theme that runs through all of his work is the varied use of light, often in conjunction with words.

Kucks intention is to illustrate a humorous critical point of view.
His focus lies on conceptional and performance art. This can be expressed through criticism of the unreflected awkward decadency of our nowadays society or even by playful constructions of reality. His ideas and conceptual art is expressed through all different kinds of media: sculptures, installations, video works, performances and design.

Kucks art – and design works are a mirror of his biography.
At first he studied law, a path that he has to left shortly before his first state examination, cause the stiff environment would have led him straight into insanity. The logical outcome for Kuck was to engage in the studies of philosophy and history in order to understand how artistic approaches can be transformed into concepts and performances.
His master’s thesis in philosophy considered the question, how the standard of living is affected by the money paradigm of our economic systems.

In 2012, under director Bonaventure Soh Bejeng Ndikung, Jan Kuck had his first major gallery exhibition (PACKET-SOUP) at the non-commercial gallery SAVVY Contemporary Berlin, which was held under great media attention.

In October 2013 he presented his design sculpture – the T.TABLE – at JR Gallery Berlin to a selected audience and therefore received considerable national and international press attention.

From June 2014 Jan Kuck has been represented by BERNHEIMER CONTEMPORARY. Since than until March 2022 he took part in almost 70 exhibitions in Germany and also worldwide.

Especially his last exhibitions received great attention in the press and art scene. After his solo presentation at Kunsthalle München Time to talk now! (April 2019), Jan Kuck spoke at TEDx Munich and was the first light artist to get the chance to play the Munich Siegestor during MCBW 2020 with his light installation DESIGN! or NO SIGN?

His largest art installation in public space to date is THE BURNING RIVER, for which he set nearly 100 meters of Munich‘s Isar River at the height of the Deutsches Museum seemingly ablaze with industrial lasers in March 2020, asking people from all over the world to answer the question „What are you burning for?“

From summer to fall 2021, numerous of his neon signs were exhibited in Munich, Augsburg and Passau as part of the Designwalk.Art exhibition, including in front of the synagogue in Munich.

In August 2022, he exhibited several of his art-works in the park of Schloss Bellevue at the Federal President‘s Citizens‘ Festival.
From Mai 2022 until the beginning of 2023 two of his TIME MATTERS neon-works were installed at the historic entrance gate of the Protestant Central Cemetery Regensburg.

Currently he is preparing national and international solo and group exhibitions.
Like his solo show „WORDS ARE OVERESTIMATED“ at Galerie Koppelmann in Cologne or his double presentation of ARACHNE and THE BURNNG CANAL at the Copenhagen Light Festival.

„Art is philosophy that sets in with multidimensional beauty and sharp wit, where words alone are no longer sufficient to ask the really basic, disturbing, and above all, inspirational questions.“
Jan Kuck